A downloadable game for Windows and macOS

We are making a four-player team deathmatch game.

Hook the enemies to your side and eliminate them to collect diamonds.

Basically, our game consists of the parts below:

Hook: the feedback said our previous hook mechanics didn’t make physical sense (the first hook is much slower than the second hook). So we decreased this speed difference and increased the speed of the hook. And players now cannot cancel the hook so they cannot drag the opposites into the river to score. What’s more, now when being hooked, the player would reduce health.

Sound: We add many audios in the game.

Health bar: We change our original health bar by finding an awesome image for that. In addition, we change parenting to the following. So, the health bar showing now is only visible by the player itself. Players can figure out others' health by noticing their body colour. The lower HP they have, the brighter body they have.

Guidance: We fixed the tutorial bugs that appeared last time and added 1,2,3,4 keys to skip the tutorial if the soft lock happens again.

We made changes based on feedback from our peers and instructor’s playtestings, and redesigned the mechanics of the hook to make it more intuitive (make physical sense).

Since somebody said that the health bar is not clear when changing the camera of the player, we change the parenting to following. Also changed the HP system also shown by the color of our players’ body.

To emphasize the importance of the hook, we add the damage to the hook if the player is hooking an enemy, it will cause damage during the process of being hooked.

Also, we still want to make it a multiplayer game rather than change this to a single-player game.

We made changes based on feedback from our peers and instructor’s playtestings, and redesigned our combat mechanics. Instead of just punching each other, we add uppercutting. We think this is fun and it requires some skills to do a combo.

We are also trying to make our game look more professional and juicy. Knowing the feedback that our game can be juicier, we improve the particle system of collecting power when punching, adding pirate hats for the players, and we added an ending scene to make our game more related to the theme and juicier. We also removed friendly fire to let our game be more intuitive and added quality audio to make the gameplay more intense.

As the instructor said, our damage indication is kind of vague. So, we add some warning when there are some uppercuts and big hits. Also, the grading team figured out that the game can be much juicer. So, our team adds some effect when somebody is getting punched and an animation when charging the punch.

There are five different abilities (punch, hook, uppercut, big-hit, shield) but we do not think the players know how to use them all, so we made our tutorial more comprehensive.

The player feedback told us that some people thought the shield was somewhat useless. But we think the main problem is not the mechanism itself but the lack of tutorials that clearly explain the mechanism of the shield.

There is some feedback that is impossible to be fixed at the moment due to poor Parsec features, including mouse control, cursor lock, and hiding cursor.

According to the feedback from the instructor, we try to improve our technical aspect. We try to make the game and the audio smoother for both host and clients.

In addition, the instructor has mentioned mouse controlling. So we tuned the mouse sensitivity.

Also, we tested 20 times as our instructor said and found that a pro player could combo the enemy infinitely. So, we decided to make it more difficult for players to combo infinitely, which would be much more friendly to new players.

To host the game:

Note:  The game can only be hosted on a Windows machine.

4. Open the generated URL in a browser.

5. Copy the generated User Code and paste it to the text box that says "Enter your one-time code" on the web page.

To join the game:

After you receive the URL from the host, open it in a browser to join the game.

Note: To get the best gaming experience, please download the Parsec application. 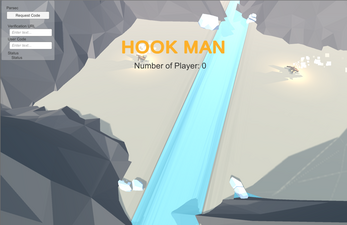